The Last Candles of the Night 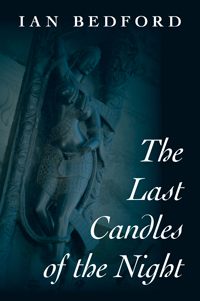 After a lifetime in India, Philip returns to Australia in 2001 – the year of "Tampa" – seeking to re-establish links with his estranged wife Jenny, whom he had brought from India fifty years earlier, and with his grandson. Displaced and disappointed in his hopes of resuming a career in his own country, Philip is visited by a ghost: Ragini, the young revolutionary he fell in love with in 1948.

Philip is troubled by his unsorted memories of those times. In 1948 India has achieved its independence but the princely state of Hyderabad – the Nizam's Dominions – with its feudal splendours and deep pockets of rural poverty and injustice, totters alone, unwilling to accede to India, fighting Communist insurrection within. Philip, "the world's youngest headmaster", has been appointed from Australia to a one-teacher school in the distant town of Warangal, a post no Hindu will take. He meets Anand, a Congress Party member working to bring Hyderabad into the Indian Union, and Ragini, landlord's daughter and Communist, who has given away the family lands. A love triangle develops as events sweep them up – events that will return to life and take their toll half a century later.

The Last Candles of the Night is a lyrical and moving tale of the pitfalls of memory and the costs of deep allegiance.

"The blurb describes the novel as ‘… lyrical and moving …’ Moving, it surely is, but lyrical elements only appear in the second section, shorter and crisper than the first. The novel shows its best writing in the final few pages. It is a fitting finale of a good story, imagined with care and told with graceful skill."
— Subhash Jaireth, Mascara Literary Review 16 (2014)

"A man’s past and his complex emotional relationships unravel against a background of Indian history and the Tampa affair. … I was excited by the prospect of reading this novel based in India, but written and narrated by an Australian. India has a lot of history, and themes explored by writers such as Vikram Seth, Jhumpa Lampiri, Paul Scott and EM Forster are tackled here with an Australian perspective. Bedford explores the violent history attached to the birth of modern India and as we go backwards in time to 1950, we are treated to a rich account of the complexities of the Partition and the relationship between the Hindus and the Muslims. This is for me the most successful part of the novel. Not so successful was the attempt to tie the narrative in with the Tampa affair, and thus contemporary refugee policy.
The novel is well researched and has all the ingredients of a good story. The history is fascinating and the ambiance of the febrile state of Hyderabad prior to its annexation by India is palpable. There is also an interesting and mysterious love story at the heart of the novel."
— Michael Jongen, Newtown Review of Books, 4 December 2014

"[T]he novel offer[s] several fine vignettes of people, places, and happenings in the tension-filled Hyderabad of 1948, as well as in the reluctant-to-change-but-changing Australia of 2001; pages describing – with sensitivity – problems faced by Indian students in Australia; the musings of the troubled old Philip; the doings of the delectable young Ragini …
Above all, however, there are the last five wonderful, almost lyrical, pages of the novel. They alone are worth the three hours [it takes to read the novel]. But take care when you reach them; they could leave behind in your old heart an unbearable ache for a love lost a lifetime ago."
— Kiran Doshi, The Book Review (India)

Three critical essays on The Last Candles of the Night were presented at a literary event on memory in fiction at Gleebooks, Sydney, on 19 June 2014. Read the essays here: http://www.lacunapublishing.com/index.php/authors/bedford-ian/the-last-candles-of-the-night/critical-essays

The Last Candles of the Night
Open