by Steve Tolbert — OUT NOW 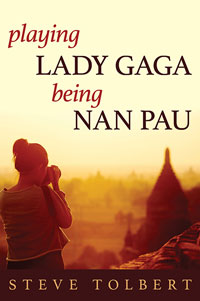 When Mya Paw Wah commits a crime during a political protest in Yangon, she flees the city to avoid the fate of her father and brother – one a political prisoner, the other killed in the police action against the protest. Military Intelligence agents, human traffickers, landmines and snakes are among the dangers Mya faces in her journey to Karen State, near the Thai border, to find her exiled mother. To survive, she plays many roles – bar-girl, novice nun, military porter, teacher – some by choice, others forced on her, as she struggles to overcome anger and despair, and maintain hope for a better life.

Tasmanian Nick Stanish comes to Thailand looking for his missing brother – an aid worker at a medical clinic for Karen refugees – and to avoid dealing with a guilty secret. Seeking answers in the Snake Skin nightclub, Nick instead finds the local Lady Gaga – the club’s star entertainer – and is drawn into a world of sex slavery and drug smugglers – and possibly love.

Playing Lady Gaga, Being Nan Pau is a compelling tale of survival and redemption, of actions and consequences, and of the best and the worst of humanity.