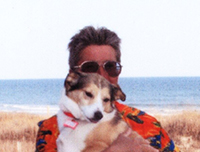 Jass Richards is a Canadian writer, former stand-up comedian and philosopher based in Ontario. She has received four Ontario Arts Council grants for her work. Excerpts from her fiction have appeared in The Cynic Online Magazine, Contemporary Monologues for Young Women (vol 3) and 222 More Comedy Monologues, as well as on Erma Bombeck’s humor website. Her one-woman play Substitute Teacher from Hell received its premiere performance by Ghost Monkey Productions in Winnipeg. See www.jassrichards.com. She also writes as Peg Tittle: www.pegtittle.com.

A Philosopher, a Psychologist, and an Extraterrestrial Walk into a Chocolate Bar, Jass Richards (Lacuna, 2018)

TurboJetslams: Proof #29 of the Non-Existence of God, Jass Richards (Magenta, 2016)

This Will Not Look Good on My Resume, Jass Richards (Magenta, 2010)

Sexist Shit that Pisses Me Off, Peg Tittle (Magenta, 2014)

What If? Collected Thought Experiments in Philosophy, Peg Tittle (Taylor and Francis, 2003)