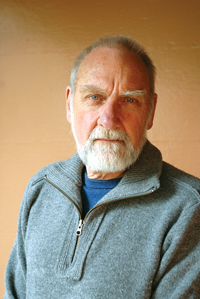 Once upon a time, a boy met Mr Holmes and Mr Marlowe, Mr Templar and Mr Spade, and wanted grow up to be just like them.

He was born, raised and educated in Ballarat, and encouraged by teachers to become a teacher. He had a knack with pencil and paper, thus became an art teacher and, eventually, a university lecturer in studio practice, visual theory and cinema. Living and working in Warrnambool, Victoria, with his wife Daina and three daughters, he has produced sculpture, ceramics, numerous caricatures and illustrated a number of educational text and extension activity books aimed at primary and secondary students. Two of his short stories have been published and another, Just A Line, was runner-up in The Age Short Story Award for 2004.

The boy’s life never grew to resemble that of Sherlock, Philip, Simon or Sam, so finally he was driven to create a fictional hero in their image. His first novel, The Dragon’s Skin, was published by Lacuna in 2016.