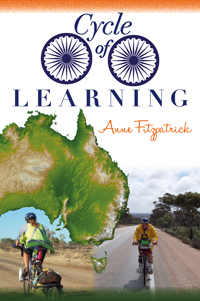 “I crashed to the ground, landing sandwiched between the bitumen and the bike I was somehow expecting to ride solo and unsupported around Australia. I couldn’t even ride it to work without embedding bitumen into my knees and grating strips of skin from my forearms. What was I thinking?”

After backpacking around Asia, Anne Fitzpatrick spent three months volunteering in rural India. Inspired by the program, she returned to Australia determined to raise funds for the education of young people in Kodaikanal, by cycling solo around Australia – despite having no experience of either long-distance cycling or fundraising.

Cycle of Learning is Anne’s story about her journey and the people she met across urban and rural Australia – at Australian schools and community groups where she arranged to speak, among the fellow cyclists she found on the road, and the family, friends and total strangers who assisted her.

It is also the story of the people in India involved in the education program for which she was raising funds, as children when she first met them and as young adults when she returns nearly ten years later.

This is a highly readable, funny and inspiring true story.

40% of royalties earned on all sales of this book will be donated to community development projects.

“In 2001, Adelaide-born backpacker decided to take a break from the roads of deepest Asia and volunteer at an education initiative in the Kodaikanal Hills of southern India. Returning home, she undertook to raise funds to help that region’s disadvantaged people by cycling around Australia, addressing schools and community groups and raising awareness. This book chronicles that ride, from February, 2005 to June, 2006. Each chapter gives distance and time travelled and money donated, and there is rarely an idle moment, but plenty of good cheer. The gutsy author’s commitment hasn’t ended with the book, with 40 per cent of her royalties to go to aid projects.”
— The Weekend Australian, 30 May 2015

1. See You If You Get Back (Adelaide, SA, to Melbourne, Vic)

6. Gender, Bottoms and Nudists (Mackay to Tully to Hughenden, Qld)

7. Desert Craziness on a Bike with No Name (Richmond, Qld, to Alice Springs, NT)

8. The Wondrous Glory of the Everlasting Stars and the Vomit that Missed Banjo Paterson (Alice Springs to Katherine, NT)

9. No Fire-Twirling Inside (Darwin to Hayes Creek, NT)

14. The Demise of Poncho and the Rise of TYPHOON JACKET (Pemberton to Kalgoorlie, WA)

19. Zip-Lock Bags Can’t Solve Everything (Launceston and back via Burnie, Tas)